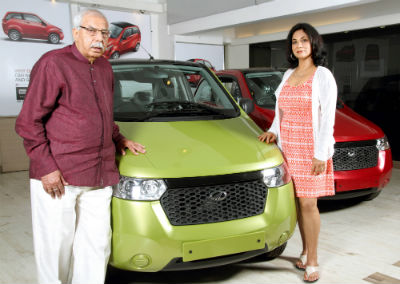 “The making of India’s very own green car is the coolest story to write. I had to write it.”

Sandhya Mendonca’s latest story is about the most unusual Indian vehicle, the Reva – the country’s first commercial electric car.

Her book, which is her latest endeavour, is a collaborative effort with Dr S K Maini, founder of Reva. Titled “Reva EV: India’s Green Gift to the World”, the book (published by Random House India) is due for launch on July 15.

A long-term association with the Mainis, combined with her inclination towards being a part of documenting Reva’s journey led Mendonca to take up this project.

Speaking about her creation, she explained that “Reva EV…” is a book that celebrates the spirit of entrepreneurship. She also spoke to us about the long relationship her company shared with Maini, who is without any doubt one of the city’s most relevant technology entrepreneurs.

Mendonca spoke about the development of this book, about the Reva EV and about her love for Bangalore.

As an author, why did you feel it was important to tell this story?

The making of India’s very own green car is the coolest story to write. I had to write it.

How did the collaboration with Dr S K Maini happen?

I have known him for close to 15 years, having coaxed him when I was a journalist to give me the story of the Reva, before the scheduled press conference. He’s been an avuncular presence in my life since then, and we have sat down for several tea and literary discussions over the years.

When I became a media entrepreneur, he was the first to encourage me and has always bought our books. He had once told me that when he got down to writing a book, he would ask for my help. When he called me in 2011 to help him write the story of Reva, I was delighted and honoured.

What was your approach towards structuring this book, as a writer?

We discussed various styles before agreeing on a simple narrative. I admit that one of my strongest influences has been Ricardo Semler’s book, ‘Maverick!’. I am indebted to my son Aditya for introducing me to this book, and in fact he was the first critic of the initial draft. I am glad to say he approved. We have stuck to a frank, and I hope, warm first person narrative. The challenge for me was to become the voice of Dr. Maini, so to say, in articulating his thoughts.

What can a reader expect from this book?

“Reva EV…” is a story of a dream turning into reality through passion and perseverance. It is a saga that holds up the value of frugal engineering, of building capability in India in a new area of technology.

It is also a manual for incubating and growing a business. The book drives home the values of building bridges with customers, associates, employees, and, above all, a business centred on knowledge.

It is a story that chronicles the personal commitment of Dr Sudarshan Maini to manufacture Indian engineering products that could hold their own in the world. He established the Maini Group in Bangalore, which is a pioneer in technological innovations and engineering manufacturing.

At its essence the story of Reva is also a human story, of a father fuelling the intellect of his son, of a family pulling together to overcome tough times, of giving wings to a dream.

In what way is the element of Bangalore reflected in the book?

As a citizen of Bangalore, I am justifiably proud that an innovation such as Reva has been produced here. This city can trace its scientific and technological lineage to the Indian Institute of Science and the many once- exalted public sector engineering companies. It was at the helm of the software technology revolution too.

I wanted to be part of telling the story of how a revolutionary product came to be manufactured in namma Bengaluru .

What was your take on this compact electric car’s journey from concept to consumer?

It is indeed a revolutionary car. Sceptics who laughed (and still do) at its limited range have blinkered vision. With the cost of fossil fuel increasing in big leaps each month, the EV is the vehicle of the future. Right now, as an extra car for running about the city, it is the best buy. The Reva is more than a car—it is a cause. The technology used in the Reva transcends a brand. Its impact on society will be far bigger and will influence the way that the world views mobility.

Why didn’t your company publish this book?

I had a tough job persuading Dr. Maini to hand over the manuscript to another publisher. I did this for two reasons. After completing the manuscript I strongly felt that this story needed to be read by budding entrepreneurs and students. My company is a niche publisher focusing on coffee table books, and while we could have published the coffee table version of the book with ease, a bigger publisher has the distribution channel for paperbacks.

The second reason was that I wanted an unbiased treatment of the writing.

“Reva EV: India’s Green Gift to the World” is available on Amazon India for a little over Rs 210. It is also available on Flipkart.