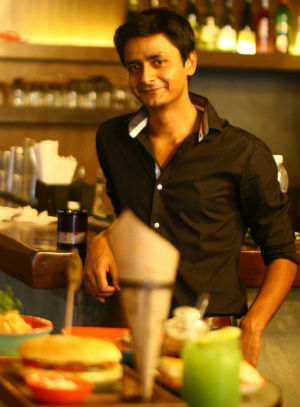 Executive chef of three acclaimed restaurants, two of which he is also a partner of, Manu Chandra is not only one of the youngest but also one of the most successful chefs in the country.

He believes that nothing should be the way they say it should and that if you don’t add your own stamp to it, it’s not worth it.

It all started with a packet of Maggi noodles. Whilewe mortals tend to follow the instructions on the packet (that the noodles must be boiled for two minutes), Chandra would to cook it for 3 minutes.

“I would stand on a dining chair in front of the stove and I found that stirring the noodles for three minutes yielded better results,” he explained.

Inspired as such from childhood, with grandmothers for teachers, Chandra knew that he was destined to become a chef.

The passion did not stop. Among the unusual things that students of the tony St Stephen’s College have done, Chandra enrolled at at New York’s Culinary Institute of America (the other “CIA”).

“I was quite determined to join CIA. I wanted to pursue my dreams of becoming a chef at that institute, because it seemed like the perfect place where a bunch of like-minded people would be trained together.”

While he studied at the CIA, he apprenticed in some of the city’s most celebrated kitchens. From Restaurant Daniel to Gramery Tavern, he eventually debuted at the Mandarin Oriental Hotel in Manhattan.

And he was still barely 22 years old.

“It was a phenomenal experience because it was one of the most anticipated hotel openings in Manhattan in a very long time, and also happened to be housed in what was being dubbed as the new twin towers – the Time Warner Centre.” (The Time Warner building is located at Columbus Circle, perhaps the swishest location on the city’s west side.)

Next, Chandra’s talent took him from New York to Norway.

His friend signed him up for the International Seafood Cooking Competition sponsored by the government of Norway and the Norwegian Seafood Counsel, where he was asked to conjure two recipes.

Chandra made it as one of 50 semi-finalists, then the made it to the top 10. The story ends happily, “I won the competition with a unanimous vote from the judges. I did not expect that,” he exulted.

The prize was $10,000 and a fully paid month-long trip to Norway with an internship at the only two star Michelin restaurant in all of Scandinavia.

While it started as a holiday, his stay in Bangalore resulted in him becoming the Chef de Cuisine at Olive Beach. “I thought I was too young to run my own restaurant,” he said.

But he proved himself and any other non-believer, wrong.

The title of Chef de Cuisine may mark the peak of a culinary profession for many.

But the iconoclast in Chandra keeps him from being typical.

Among the accolades, Chandra was named one among India Today’s list of Young Achievers, Taste and Travel Magazine’s Top 10 Best Young Chefs in the Country, Business Times’ India’s 10 Best Chefs, one of New York Times’ and Time Magazine’s most promising and talented young chefs in India and even Elle Magazine’s Hot List.

Under his patronage, Olive Beach was among Outlook Magazine’s Top 10 Restaurants and was also featured in renowned food critic Marryam Reshi’s book ‘100 Iconic Restaurants in India.’ Some restaurant guidebooks also named it the Best Mediterranean Restaurant in Bangalore in 2006, 2008, 2009, 2010 and again in 2011.

Recently, he was featured in AmarOne, a book featuring 10 chefs from around the world, released by Italian wine maker Allegrini to celebrate 60 years of their famed wine.

Manu Chandra is today an entrepreneur.

Along with hospitality expert Chetan Rampal and restaurateur AD Singh, he is one of the brains behind Olive Cafes South, a subsidiary of Olive Bar & Kitchen.
The trio launched what they call India’s first “gastropub”, Monkey Bar in 2012. They also own the quirky Asian bar and restaurant in Whitefield Bangalore, called “LikeThatOnly”.

Word of the burgers at Monkey Bar has been on Bangaorean lips for quite some time (as indeed have the burgers). Conde Nast International Gold Standard 2013, Time Out London and Singapore have listed Monkey Bar as one of the “must visit” places in the world.

Chandra explained his work ethic. “I take utmost care in maintaining the honesty and consistency of all the materials that constitute the burgers. And that really is all a chef can do. Opinions are for the customers to form,” he said.
Who are Chandra’s heroes?

“I don’t believe in idolising anybody,” he replied, “not for any other reason because there are so many people doing good work. If I had to pick idols, it would be the unsung farmer, fisherman and the butcher.”

Monkey Bar’s success has resulted in it opening a second outlet in India. This time in Delhi. They are looking to follow it up with many more outlets across the country.

So what is a Manu Chandra? Chef or entrepreneur?

“Chef,” he replied in a heatbeat. “The adrenaline rush that comes with standing on a kitchen line and working real time to impress paying customers – it’s a thrill.”

For a man who changed the way Maggi noodles are cooked, we are not surprised.