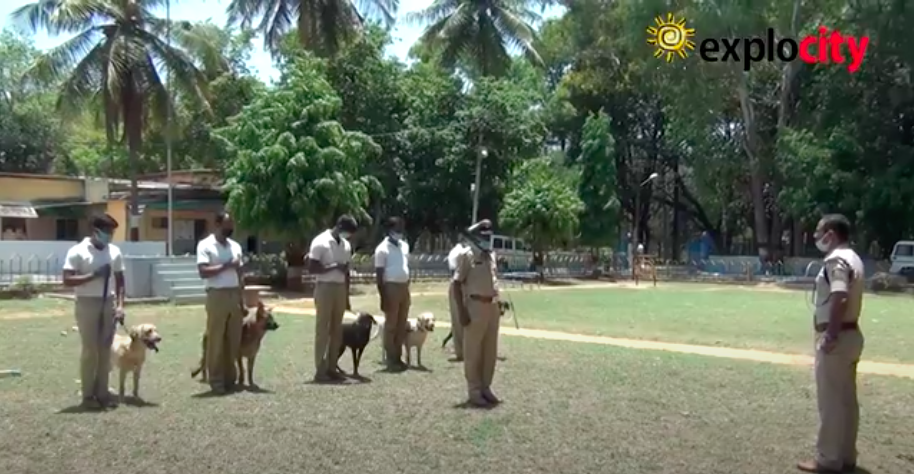 The Hosur Road leading from central Bangalore to Koramangala is quiet. Typical of a lockdown day. The fact that we drive in 4th gear is as unusual as the absence of noise and air pollution.

The acreage is green and filled with mango, coconut and jackfruit trees.

A bunch of policemen sweep between the trees. The sound of dogs barking in the distance is uplifting. One of them is saying something loudly, but somehow, you can tell the complaint is about something trivial.

From the distance, not far enough, is the sound of someone learning to play bagpipes. We use “learning” and “play” with a degree of charity. (If only there was a way to report the torture of bagpipes to a Society for the Prevention of Cruelty to Musical Instruments… but we weren’t there for the “music”.)

With all the orderliness and the sylvan-ness of the campus and the prospect of meeting cute dogs, it is easy to forget that the Bangalore police dogs have a serious and dangerous job. They assist the police in ways that neither man nor machine can. The cuteness of the dogs belies their ferocity.

They are trained to throw themselves through glass windows, enter terrorist hideouts and confront armed criminals. To do this, they need to be lithe and strong and be a weapon for the police. 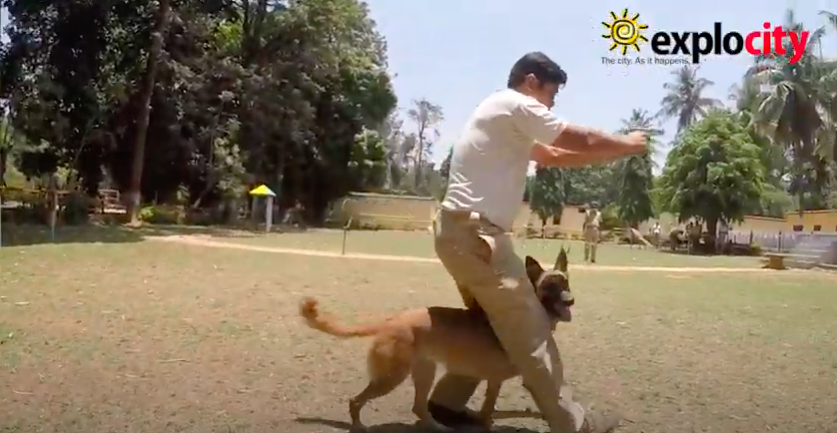 And then there are the other dogs who are trained -- on account of their extremely advanced olfactory senses - to alert their handlers to the presence of explosives and drugs. And also, to provide clues in the case of theft and murder.

Not being natural subjects or advocates of the Indian Penal Code, the police dogs do what they do because they are creatures of duty and are devoted to their handler;  the latter reason being the fulcrum of the entire police doggie doctrine. Indeed, being devoted to one’s duty and having the discipline to follow orders is the entire doctrine of the uniformed services.

It follows that the relationship between a dog and its handler is nurtured from a young age, and through a system of reward -- never punishment, we learn -- dogs are inducted into the force. The head of the dog squad, Assistant Commissioner of Police, Ningareddy Patil, told us that discipline is central to the force, whether human or dog and the nature of dogs fits easily into the ethic.

In the time we spent with the dog squad, we were treated to a demonstration of everything that we described above. The various exercises -- such as jumping over hurdles, crawling through tunnels, jumping through hoops, walking in place with the handler, alert and ready to attack -- were demonstrations of speed, agility, strength and above all, the unquestioning sense of duty and purpose. There was even a mini parade, where the dogs joined the handlers in saluting the senior officers.

And all this for a little more than - quite literally - a pat on the back.

ACP Ningareddy Patil joined the dog squad six years ago. A dog lover himself - he left his pet labrador in his home in Gulbarga so the dog did not have to be hemmed into a 2nd floor apartment - he has studied dog training and has been trained, among other places, in Virginia, USA.

Explaining the highly trusting relationship that dogs have with the handlers, Patil told Explocity that the only thing that worked with dogs was reward. He said that the notion that dogs should not be shown too much affection -- for fear that they might become soft -- was incorrect. “Our dogs are sometimes better than humans,” he said, “they don’t ask for anything in return and are content with just love and affection.”

They never beat the dogs. Patil said, “Our dogs are like our children. They respond much better to treats and appreciation. We would never ever hit them. They respond when we change our tone. Raising our voice is the extent of the punishment they receive from us.”

ACP said that the 65 dogs in the Bangalore Police squad have 10 acres of land with five kennels. Their days start at 6am when the handlers arrive to take the dogs out of the kennels. The dogs are well rested and eager to meet their handlers.

The handlers “belong” to the dogs. They develop a relationship with them from when they are puppies. 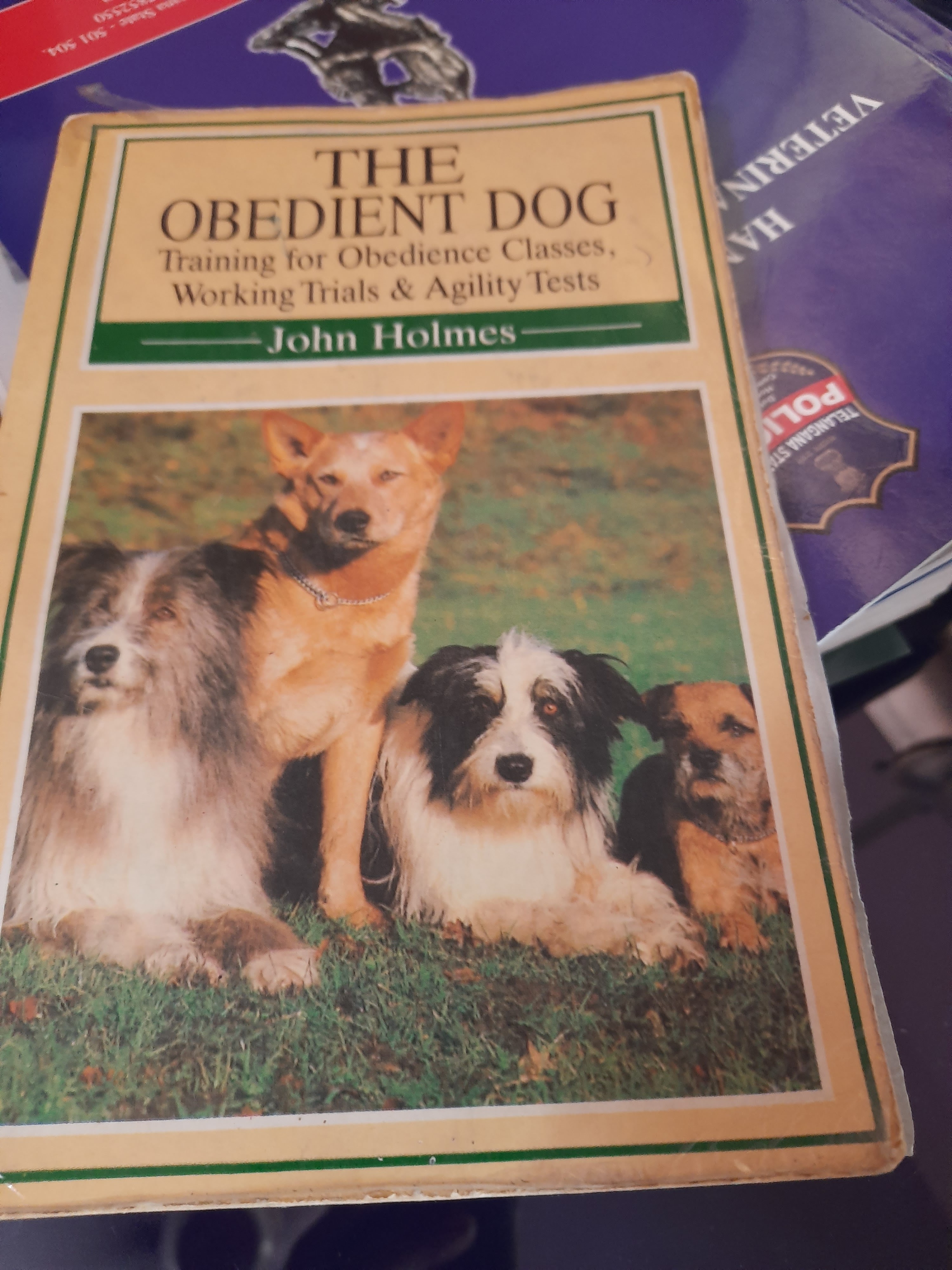 Ashok Rathod is Head Constable and handler of Nidhi, a Beligian Malinois dog. Nidhi is attached to Rathod, like his shadow, and is trained to take all her orders from him. An example of the seamless relationship between dog and handler can be seen in the video, with the “place walk”. In a terrorist situation, the dogs need to move every step with the handler. Rathod demonstrated the drill for us and Nidhi stayed between his legs and moved swiftly with every single and sudden movement Rathod made.

She even knew when to duck in order to give Rathod enough room to squat, should the need arise, like deflecting an incoming bullet. “The Malinois is a very agile dog. They work well because of their speed and agility,” Rathod said.

Labradors, Dobermans and German Shepherds are the other dogs on the force. Each with a special skill they are trained for. It could be sniffing, security, explosives and narcotics detection or terrorism. These dogs are recruited as pups and then observed for a week. Once their characteristics become more apparent they are trained to enhance that skill. Rathod said once you are able to read your dogs characteristics, it’s a matter of fostering it.

TIPS FROM ASHOK RATHOD ON YOUR PET DOG

The Bangalore Police are looking to raise their dog squad by another 50 dogs.

In a first, the Bangalore City Police have also started training Bangalore’s Indie dogs. While there are lots of Indies in the city, their skills are yet to be observed and fostered. Explocity will bring you this story soon.