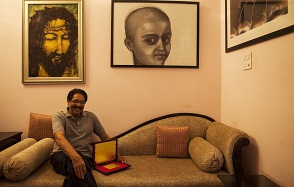 Etched in stone, Yusuf Arakkal’s muses stand magnificently across the globe – a six-inch tall dancer from Mohenjo-daro in Delhi, The Three Graces of Rubens in Madrid and Venus de Milo in Paris. “There are other muses too, in flesh and blood. Let that be my secret,” smiles the artist, mysteriously.

What’s no secret though is the plaque, which lies on the mantel by the fireplace in his home. Arrakkal is the latest recipient of the Raja Ravi Varma Award, instituted by the Government of Kerala. “Over the years, many eminent artists including KG Subramanian MF Hussain and Ganesh Payne have been conferred the title,” he explains.

For Arrakal, who is one of Bangalore’s senior-most artists, paving the way for the future, there is a certain significance in going back to his roots in hometown Kerala, with this recent felicitation. “I belong to the Arakkal Royal family from my mother’s side and the historically famous Kerala business houses of 'Keyis' - Kerala's maritime traders, from my father’s side. Raja Ravi Varma comes from the Travancore royal family. But that is not my connection with Ravi Varma,” he says, pausing for a breath. “In the mid sixties, before I joined art college, I was taught by a member of the Ravi Varma clan - Sri. Jaya Varma, portrait painter extraordinaire, who was in Bangalore to do two portraits for MS Ramaiah. I was introduced to him; he liked my works and taught me the nuances of oil painting for one and half years. My technical base in art is that training.  When I joined Chitrakala Parishath because of my ability in portraiture, I started conducting Sunday classes for students, some of who were my seniors.

Ever since, Yusuf’s every day life, a waltz between easel and brush has been punctuated with awards. “These accolades don’t alter my attitude towards life and my art. I like to consider myself as the great artist Joan Miro did - an art worker.”

So Yusuf’s work-day begins before sunrise, with a series of workouts, before he pores through the newspapers. “I then get into my studio and begin working on anything that’s going on currently, breaking for meals in between,” he says.

“I do not go hunting for subjects, they are all around. It is only a matter of choosing what. After that it is not the subject that matters, it is the final result that with all my social concerns and other factors will have to be a work of art first and foremost. Once that goal is achieved – and many times one fails - the work becomes a piece of art. Look at the pair of torn boots Vincent Vann Gogh has painted. That rainy day he did not go looking for inspiration or subject. He just saw his muddied, torn boots and painted them. Today, these boots are probably the costliest pair!”

Here is someone who never fails to view art for art’s sake. “This is a vital point in a committed artist’s life who only worries about the paint and brush. The remuneration and fame it brings, never touches a true artist. I worked in factory as a technician for twenty years to avoid depending on my art sales for a living,” says Yusuf, remembering the great artist Francis Newton Souza’s words: ‘The art market can go up down or to hell, but a true artist believes in his work.’

So Yusuf continues to focus on what he believes in, until he arrives at that point between the simplicity of a subject and the complexity of its translation. From reality to canvas and back to reality for all to see.

“I am working on a series of nudes in oil and digital mode. I’m writing a book on nudes and on my own work. After the Christ series show, I plan to do a series on another great personality I admire and share my birthday with – Lord Sri Krishna,” says Yusuf.

Between the road less travelled and the well-treaded path of recognition, Yusuf holds his silver medal from Michelangelo’s city close to his heart. As he does, his chance meeting with the great figurative artist David Hockney at the Florence Biennale, who in turn appreciated Yusuf’s award-winning Guernica.